The statue of Jijang-bosal that greets you at Jijangam Hermitage, near Beomeosa Temple, in Busan.

Jijangam Hermitage (지장암) is a hermitage dedicated, and named after, the Bodhisattva Jijang-bosal. Jijang-bosal is the Bodhisattva of the Afterlife. He can be identified by his bald or closely cropped hair that is green, black or gold.  In his hands he holds a staff in his right hand and a pearl in his left.  The pearl is a “wish-fulfilling pearl” that grants selfless wishes, while the staff opens the gates of hell.

When you first approach the hermitage from the uphill, side-winding, road, you’ll notice both a sign that reads – 지장암 – as well as a five foot tall stone sculpture of Jijang-bosal to your right. You can get to the hermitage in one of two ways: you can either take the newly constructed road to the left, or you can take the path that leads to the left through the overgrown trees and shrubs. Originally, the path to the left was intended as the way to approach the hermitage, so that’s the way my wife and I decided to travel. Up a set of overgrown trees and shrubs, as though nature were collecting back what was rightfully Hers, we spotted a pond that hadn’t been used in quite some time. Up another set of stairs, we were finally eye to eye with the main hall at the hermitage.  Finally, up one more set of stairs and we were in the main courtyard at the hermitage.

Facing the main hall, we noticed that there was the monks’ dorms to the left, while the nicely sized main hall was directly in front of us. The main hall itself has very little exterior decoration adorning it, other than being customarily painted the standard Korean temple colours. However, the views of the surrounding mountains, Mt. Geumjeongsan, were beautiful. And inside the temple, there were a couple highlights to the trip to the hermitage. There was a beautiful guardian painting, as well as a beautiful painting of Jijang-bosal, both of which have countless Buddhas, Bodhisattvas, and guardians. The triad on the altar is Amita-bul (The Buddha of the Western Paradise) in the centre, with Jijang-bosal (The Bodhisattva of the Afterlife), and the namesake of the hermitage, to the left, and Gwanseeum-bosal (The Bodhisattva of Compassion) to the right. When leaving the temple, down the newly constructed road, there was a beautiful shrine with a statue of Buddha. Also, there was a uniquely designed meditation hall built as a hut into the side of the mountain.

HOW TO GET THERE: You can get to Jijangam Hermitage in one of two ways. In both scenarios you first have to take the Busan subway, line one, to Beomeosa station and take exit #1. Here, you can either walk halfway up the thirty minute hike to Beomeosa Temple, or you can walk a block uphill to the bus stop where you can take bus #90 to the nearby entrance of the hermitage. You’ll probably overshoot the hermitage, and have to make your way back down the hill a bit, but as long as you have a keen eye you’ll be able to spot the hermitage. After visiting the hermitage, you can either walk the remaining 15 minutes up to Beomeosa Temple, or you can find your way back to the bus stop.

OVERALL RATING: 3/10. While not the most amazing or inspiring hermitage you’ll see in Korea, the hermitage does have a few highlights. The beautiful views from the main hall of the surrounding Mt. Geumjeongsan is certainly one of them. Another is the beautiful guardian painting, as well as the Jijang-bosal painting, both of which are on the left side of the main hall. There is also a uniquely built meditation hut for the monks at the hermitage on the newly constructed hermitage road. Finally, there is a beautiful sculpture of Jijang-bosal at the entrance of the hermitage. While I probably wouldn’t get off the bus that heads up to Beomeosa Temple, I would stop by if I was making the thirty minute hike uphill to the famous Busan temple. It makes for a nice little break at the half-way point, and what better way to take a rest than to have a look at a nice hermitage along the way. The sign and the statue that welcome you to Jijangam Hermitage. The newly paved road that leads up to the left of the hermitage. 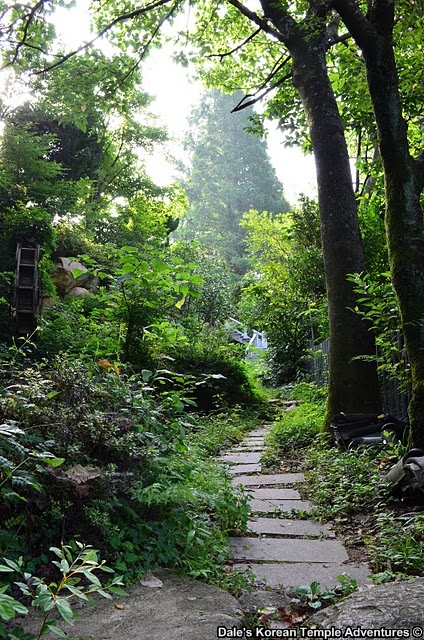 And the overgrown path that leads right to the hermitage. 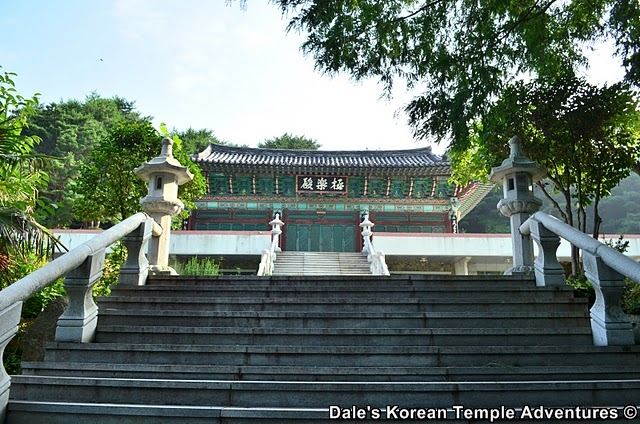 The set of stairs that leads up to the main hall and the hermitage courtyard. 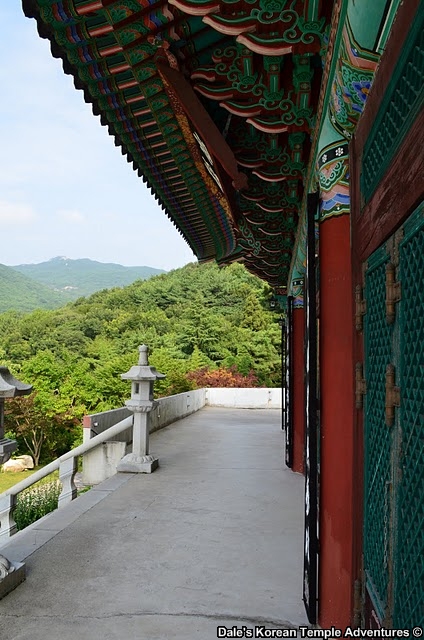 A view across the front of the main hall. 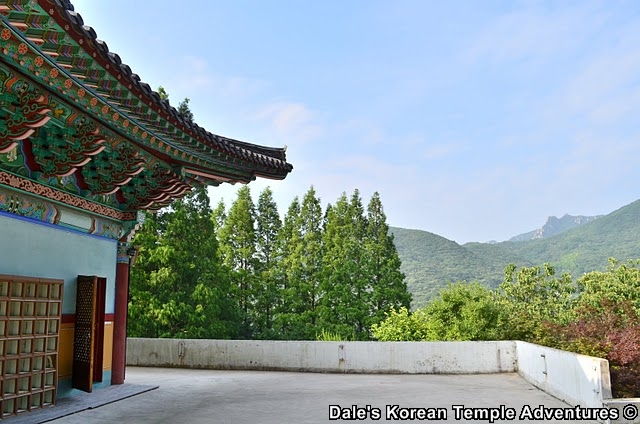 A view from the main hall at the surrounding mountains. 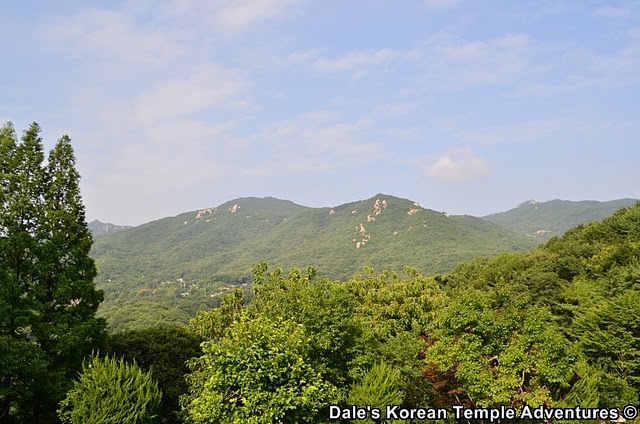 Another view of the craggy rocks that make up the surrounding Mt. Geumjeongsan. 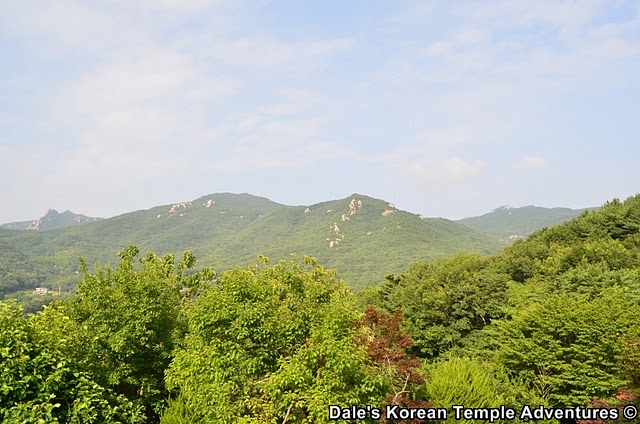 And one more look. 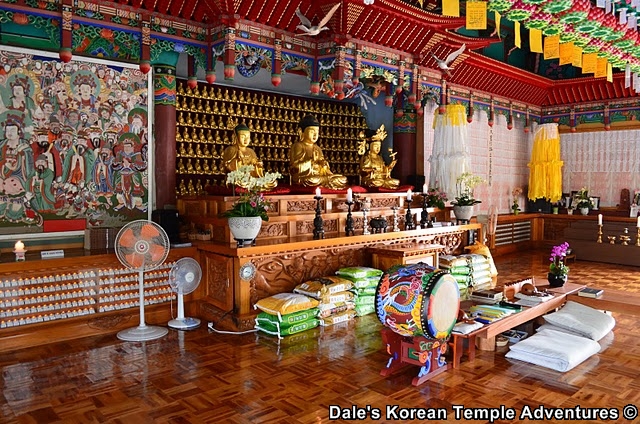 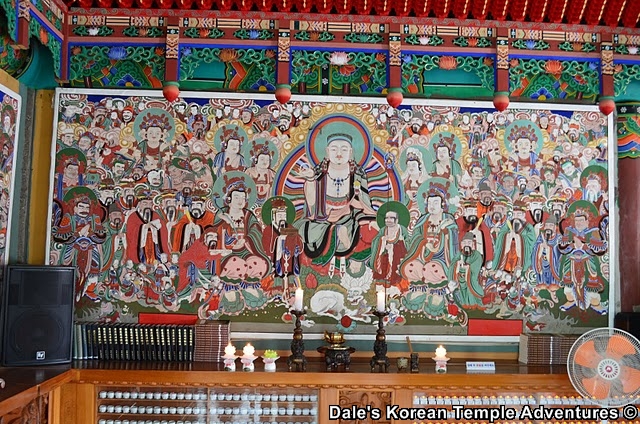 To the left of the altar is this mural dedicated to Jijang-bosal. 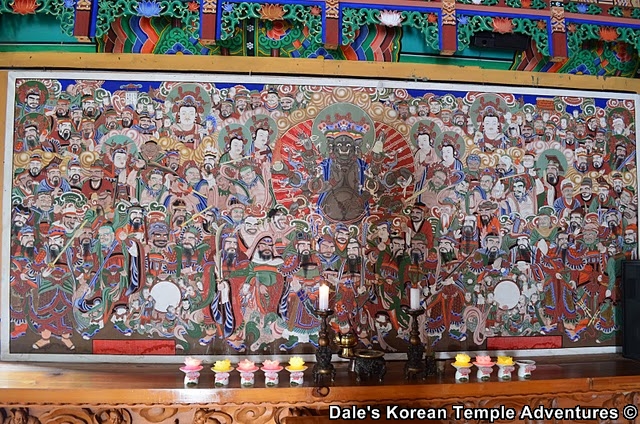 And on the far left wall is the guardian painting. 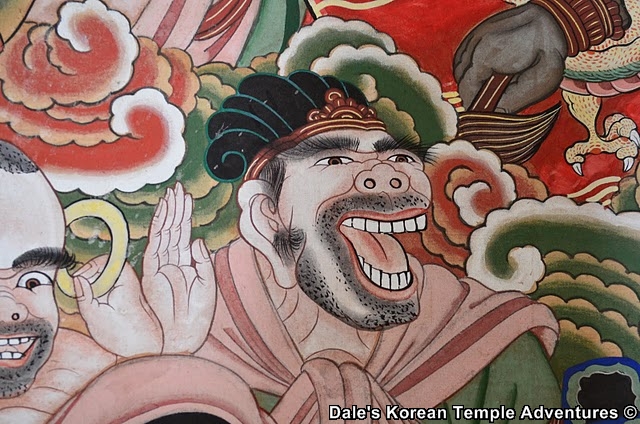 Here is a better look at one of the open-mouthed individuals on the guardian mural. 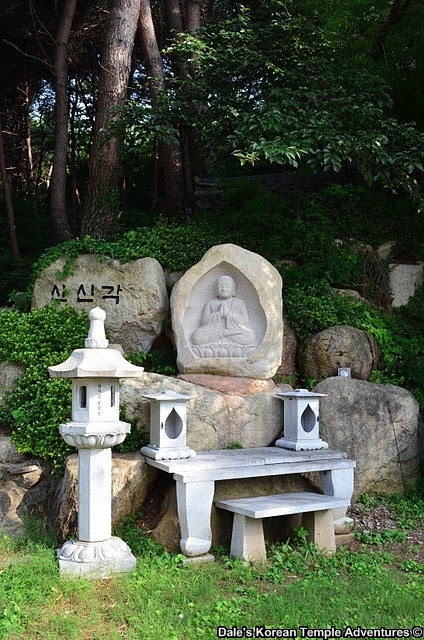 The beautiful little shrine to the left of the main hall. 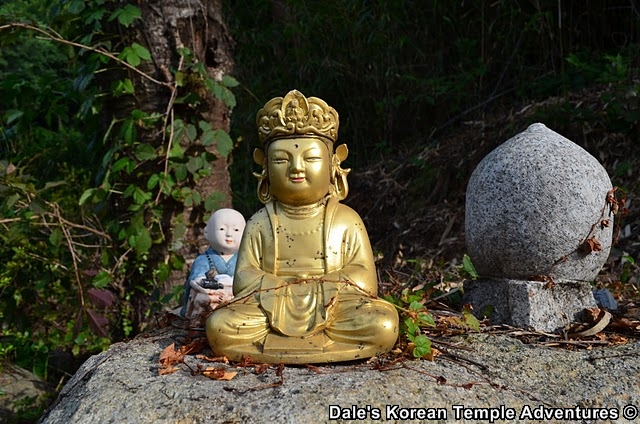 One of the little Buddha figures beside the shrine. 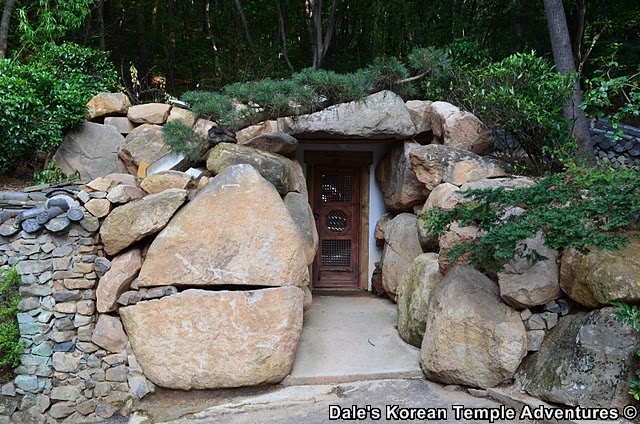 The meditative hut for monks at the hermitage. 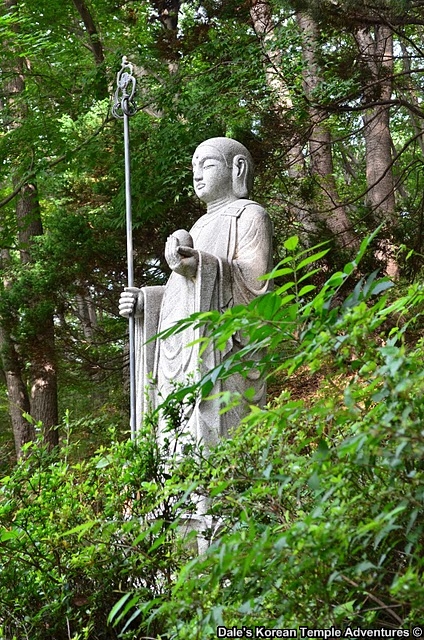 And one last look at the Jijang-bosal statue at the hermitage that both welcomes you and says good-bye.